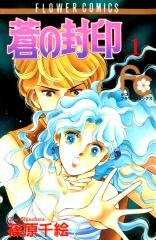 From Storm in Heaven: Soko starts feeling sick soon after moving to a new city, apparently for no reason. As beautiful as she is, a lot of guys start to bother her, especially Kashi. While trying to rape her, Kashi disappears and after a few days another guy shows up pretending to be Kashi. And everyone but Soko believes him He tells her he is Akira the Byakko, from the family of the West. Because she is the reincarnation of Souryo, the queen of the Oni from the family of the East, a monster that eats humans to stay alive, he must destroy her and erase her genes from Earth. He is the only one who can kill her and the one that must do so. Soko is desperate. Is she really a mo

by SHINOHARA Chie published by Shogakukan

Ao no Fuuin is licensed in the United States by Shogakukan . Please support the authors and publishers that bring these great titles to us by buying the official books.