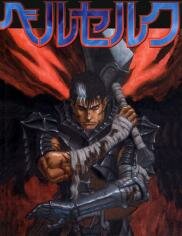 Gats, known as the Black Swordsman, seeks sanctuary from the demonic forces attracted to him and his woman because of a demonic mark on their necks, and also vengeance against the man who branded him as an unholy sacrifice. Aided only by his titanic strength gained from a harsh childhood lived with mercenaries, a gigantic sword, and an iron prosthetic left hand, Gats must struggle against his bleak destiny, all the while fighting with a rage that might strip him of his humanity.

Warning: This manga is for mature audiences only, since it has sexual content and graphic violence (gore, blood, rape, etc). Definitely not for the weak hearted.

Berserk is licensed in the United States by Hakusensha Dark Horse . Please support the authors and publishers that bring these great titles to us by buying the official books.