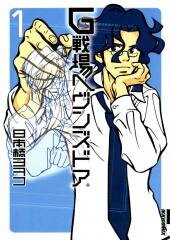 It is the story of two boys, Machizo and Tetsuo, who create manga together. Machizo's father is a successful mangaka (manga artist). Machizo feels he's living under his father's shadow, and resents his father's success. Tetsuo, who is at school with Machizo, enjoys drawing manga and is good at it. His favorite mangaka happens to be Machizo's father. The two boys strike up an alliance to draw a successful manga to win a contest, with Machizo writing the story and Tetsuo drawing the graphics. An important part is also played by a violent girl named Kimiko, who has a crush on Tetsuo.

by NIHONBASHI Yoko published by Shogakukan

G Senjou Heavens Door is licensed in the United States by Shogakukan . Please support the authors and publishers that bring these great titles to us by buying the official books.