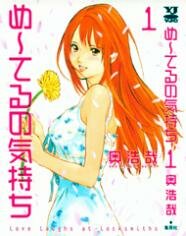 Koizumi Shintarou is 30 years old, a virgin, and has isolated himself in his room for 15 years. He has become a burden on his father, Koizumi Yasujirou. One day, Shintarou makes a proposition that if Yasujirou gets a girlfriend, Shintarou will come out of his room. It turns out that Yasujirou has already made a girlfriend, a young beautiful woman, Yoshinaga Haruka, who is with Yasujirou for her own personal reasons.Yasujirou and Haruka decide to get married, but Yasujirou dies on their honeymoon. Now Haruka decides to take care of Shintarou, and so this weird "mother and son" are now living together.

by OKU Hiroya published by Shueisha

Me-Teru no Kimochi is licensed in the United States by Shueisha . Please support the authors and publishers that bring these great titles to us by buying the official books.