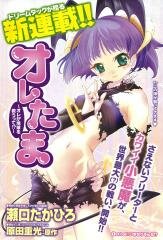 The fate of the world rests on one man's shoulders. Or, to put it more exactly, it rests on his balls. In a freak sealing accident the Queen of Terror is sealed into Satou Kohta's balls, thus preventing her from reigning destruction on the world. However a lesser devil, Elyse, has been sent up to Earth to release the Queen at all costs. The only way to do so is to make Kohta ejaculate and Elyse only has 30 days to do it. The battle for mankind has begun, in Kohta's pants.

My Balls is licensed in the United States by Hakusensha . Please support the authors and publishers that bring these great titles to us by buying the official books.