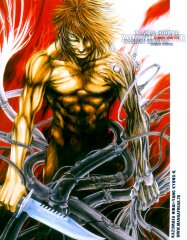 Unknown to the world aliens have begun to invade people s bodies. A young race car pilot named Toshio was won by a mysterious organization for a "test" for money. That test turned out to be a hellish training to become a Zombie Hunter. However, Toshio decided to return to a normal life but soon face the harsh reality of a Zombie Hunter. Surrounded by shallow figures and aliens Toshio accepts his new life as a Zombie Hunter ... (mangaka never finished the story)

Zombie Hunter is licensed in the United States by . Please support the authors and publishers that bring these great titles to us by buying the official books.